FREE SHIPPING ON ORDERS OVER $99!

It was previously thought that the human brain stops developing after the first few years of life, and if a particular brain area is affected, nerve cells cannot regenerate. But this thought was proved wrong by William James when he presented the first theory of neuroplasticity around 100 years ago in his book “Principle of Psychology.”

In the mid to later half of the 20th-century extensive research studies also showed that the brain retains the capability to regenerate or change even in adulthood. From there, the term “neuroplasticity” came into existence. And today, it has gained so much popularity that recent studies aim to promote neuroplasticity.

What is neuroplasticity, and why is it important?

Neuroplasticity, also known as brain plasticity or neural plasticity, refers to the ability of the brain to modify itself structurally or functionally in response to a dysfunction, new information, or development, through reorganization and growth.

It is considered a fundamental and complex property of the brain. Neurons are the building blocks of the nervous system, and all the signals travel through the neuronal pathways. Neuroplasticity occurs at the neuronal level by any of the following three processes:

Neural plasticity can be structural or functional.

Why is Neuroplasticity Important?

Neuroplasticity holds significant importance in our lives. Learning and memory that play a vital role in human life cannot be possible without the process of neuroplasticity. It is essential to adapt or change according to external or internal stimuli. Neural plasticity is essential because it promotes the ability of the brain to:

How does neuroplasticity work?

Let’s understand how the process of neuroplasticity occurs. It does not involve a single operation. Instead, it involves different processes that occur through the lifetime of an individual. The four processes involved are:

It is estimated that at birth, there are around 2,500 synapses per neuron in the cerebral cortex of the brain. At three years of age, the number of synapses explodes to about 15,000 per neuron as the child explores and learns new things through synaptogenesis. But this number is halved in adulthood due to a process known as synaptic pruning.

As we step into adulthood, new experiences are gained. New neural connections are created, and previously learned skills that are repeated strengthen the synapse while others are eliminated. Synaptic pruning eliminates the weaker synapses that are no longer needed in the memory for recall while keeping the stronger connections reinforced or repeated.

Similarly, in case of a compromised brain, the neurons in the surrounding areas compensate for the weakened functions of the compromised area.

Neuroplasticity is a lifelong process, and it can be seen in everyday life activities. For example:

If the speech controlling area of the left hemisphere is compromiseded, the right hemisphere may compensate for some of the lost speech abilities. This phenomenon of plasticity is vital in the treatment of patients with neurological events.

How to Rewire Your Brain?

Although neuroplasticity is a property of the brain, it is continually dependent on life experiences and education to organize and build neural circuits. Lifestyle plays a significant role in rewiring our brain. If we engage in learning something new or in activities that activate specific brain areas, that will help build up new neural connections that are healthy. It is believed that negative thought processes occurring with depression are due to impaired or interrupted neuroplasticity. In such cases, exercises that promote positive neuroplasticity are recommended to improve wellbeing. Rewiring your brain is something you can do at home by:

Believe it or not, playing games has several cognitive benefits: memory and reaction time, motor coordination, decision making, reasoning, problem-solving, cooperation, and team participation. All this can teach your brain new skills that certainly improve your gameplay with time and positively impact everyday life.

Research studies have shown that bilingualism strengthens white matter, increases grey matter and hippocampal density. This increase is due to neuroplasticity and also slows down age-related cognitive decline.

Compensatory masquerade uses an alternative cognitive process to perform a task when the initial process cannot be followed due to impairment. For example, during navigation, people usually employ a sense of direction and distance. But if they are not working due to impaired spatial recognition or lack of direction, they use other processes such as memorizing landmarks. Simply stated, people will compensate for the things in which they are deficient.

This type of neuroplasticity occurs when areas of the brain designed to process particular sensory input are now devoted to processing signals from other sensory modalities. For example, children born blind have shown the touch and somatosensory inputs directed to the visual cortex in the occipital lobe years after maturity.

This type refers to the expansion of a particular brain region based on continuous performance. For example, increased grey matter is seen in musicians as they keep on repeating and using specific skills. This Map Expansion applies to any skill process and associated practice.

How long does it take for neuroplasticity to work?

Neuroplasticity is not fixed as it all depends on the consistency of activities, lifestyle, and habits that stimulate the process. If you are consistent, then it may take a few months to rewire or reorganize your brain. Studies have shown that it takes an average of 66 days to form a new habit, but that again depends on how engaged you are with the new habit-forming process.

What Can Increase Neuroplasticity? 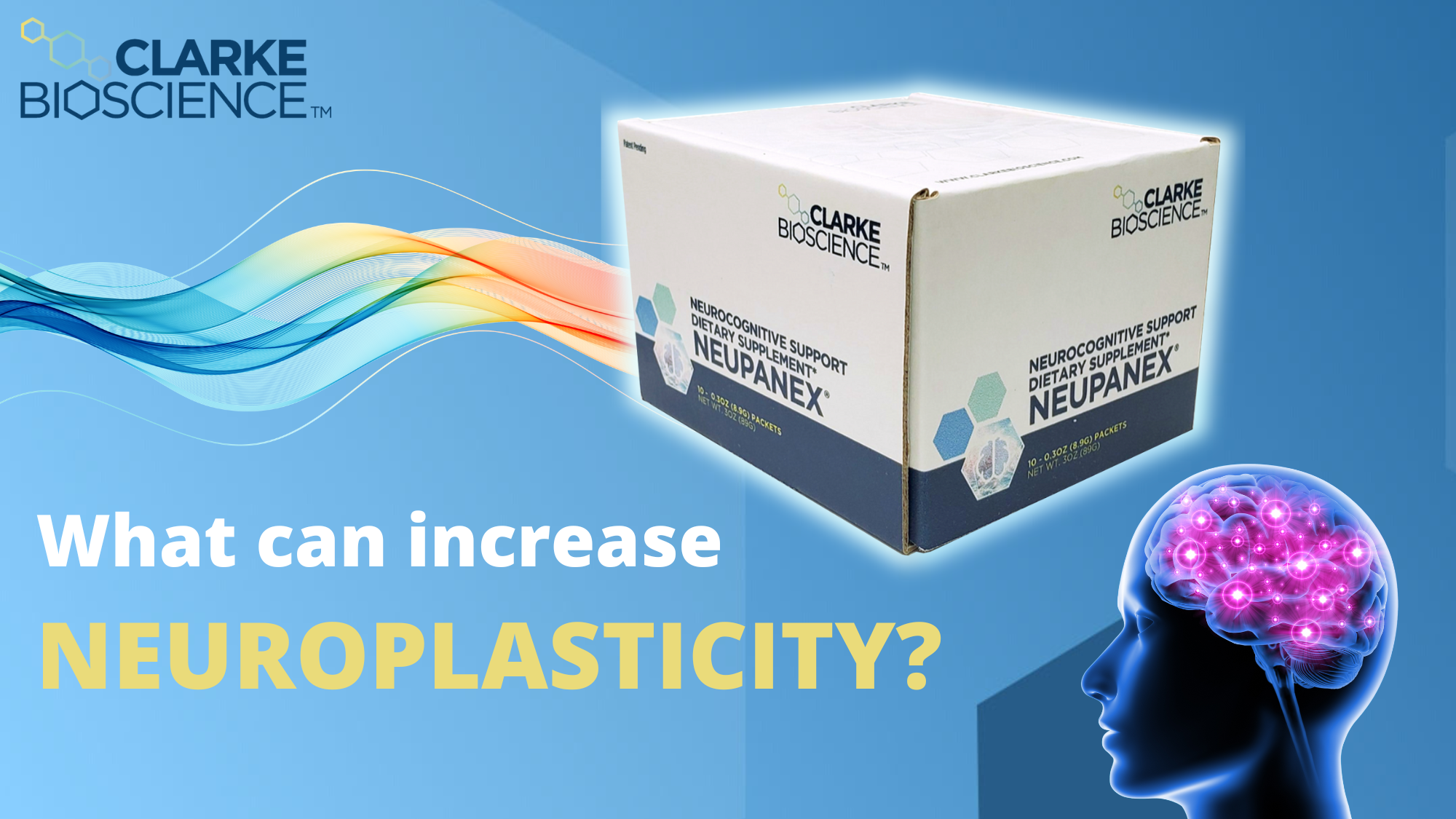 Neuroplasticity is a mechanism that occurs naturally throughout life, but we can directly impact how fast and effective it takes place. Here are some proven ways to enhance neuroplasticity.

Exercise, both cognitive and physical, plays a vital role in enhancing neuroplasticity. Physical exercise does not directly enhance neuroplasticity, but it does increase blood flow to the brain, increasing oxygen and providing a healthy environment for neuroplasticity. Cognitive exercises, including learning new skills or language and playing effective brain training games, physically change the brain’s structure. But to induce neuroplastic changes, it is crucial to keep such activities consistent.

Studies have shown that sleep helps in neuroplasticity by stimulating the growth of dendrites. It has been shown that people who have quality sleep of 6 to 8 hours have better learning and memory experiences.

A neurocognitive supplement formulated by Clarke Bioscience called Neupanex is the most potent formulation on the market today to support brain health and promote neuroplasticity. It contains a blend of natural neuro-nutrients that stimulates the body’s endogenous stem cells for the growth of new neurons.

Neupanex contains a blend of 18 naturally occurring vitamins, nutraceuticals, and antioxidants, including pregnenolone, DHEA, & PQQ, which are essential for brain health and stem cell management.

Stem cells are the raw cells in the human body that can develop into any cell in the body, either muscle cells or brain cells. Neupanex instructs the stem cells and promotes cell-to-cell communication strengthening the synaptic connections. Thus, it supports neuroplasticity by acting on these functions using ingredients our body is familiar with.

Neuroplasticity is a process vital to our survival as a species. Without plasticity, the brain will not adapt to a new environment or learn any new skill. Because of this, we keep learning and memorizing throughout our lifetime and can maintain healthy cognition as we age. Recent studies are incorporating neuroplasticity mechanisms in the rehabilitation of anyone who has suffered a neurological event. Practicing a healthy lifestyle and feeding your brain what it needs can support your neuroplasticity and overall quality of life.